Please ensure Javascript is enabled for purposes of website accessibility
Our Story
After 3 years of hard work and planning, Huntington residents Mark and Karen Heuwetter proudly opened Six Harbors Brewing Company on May 4th, 2018. Huntington Village’s first micro-brewery has been a successful addition to Huntington Village’s vibrant downtown, serving patrons from all over Long Island. Six Harbors is known for our wide variety of beer styles as well as our welcoming nautical/industrial feel which beer goers would agree is unlike most typical breweries. As residents themselves, living close-by the brewery, Mark and Karen wanted to create something special right in their own neighborhood and they succeeded. Six Harbors is not just a microbrewery, it is an ‘experience’ that is enjoyed by beer goers of all levels, people of all ages, families and even pets! 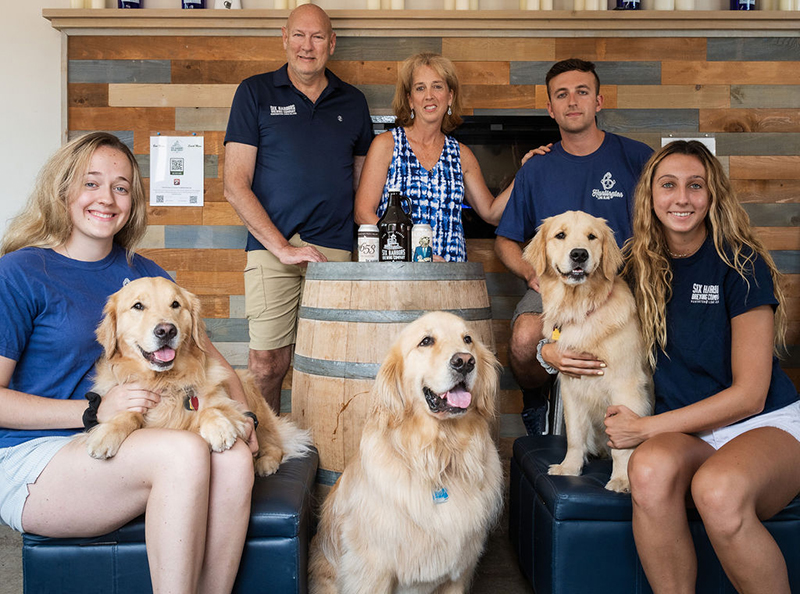 Mark worked on Wall Street for thirty years, spending most of his career with the Dreyfus Asset Management Company, where he honed many business and social skills, now used today at Six Harbors. Five years ago, after many years of commuting to Manhattan, Mark began to think about a career revolved about his passion for beer. In college, Mark and his roommate could never seem to put get enough money together to buy beer, so they started to make it with home brew kits. They made the beer in their dorm room closets, caused quite the stench in the hallways, but nonetheless, they became quite popular on campus! In recent years, Mark became very active in the local home brewers club, Hand Grenades and Home Brews, and started creating recipes and sharing the beer with family, friends, and other beer enthusiasts. When things began to get too big in scale and the odor in the house became unbearable for the rest of the family, Mark took his beer production to the family garage. What was once a small idea at this point ‘brewed’ into a larger plan, and Mark decided to look for bigger space so he could put the thoughts for a hometown brewery into production.
Karen is a life-long Huntington resident, growing up in Lloyd Harbor. Her background was in finance primarily and later, real estate. When they met 30 years ago, Karen and Mark, shared one passion: the love of the being on the water. When the beer making business began to outgrow the family garage, and the talk of making beer on a larger scale seemed like great idea by so many people that they knew, they began to search for a site in their own hometown. Their goal was to create a destination that not only reflected their passion for the beer making process, but also encompassed their passion for life near the water: something most locals and frankly, all Long Islanders could relate to! They wanted to not only create a brewery that made great tasting beer, but to create a space where you could witness the beer making process. And to do that, the stainless fermenting tanks had to be in clear view: the beer making process, the kegging, and the canning all in view of the customer. The rest of the space was designed around the four massive ten barrel tanks. The decor was designed to feel a little rustic, and a little nautical with great lighting, different types of seating and two massive garage doors to let in natural light and attract curious outsiders. The name Six Harbors comes from the six harbors in the township of Huntington and the Heuwetter’s like to name their beers after the harbors, as well as local neighborhoods, famous local historical figures, and, of course, the brew dogs Buddy, Barley, and Brandy. Can you name all of the Six Harbors?